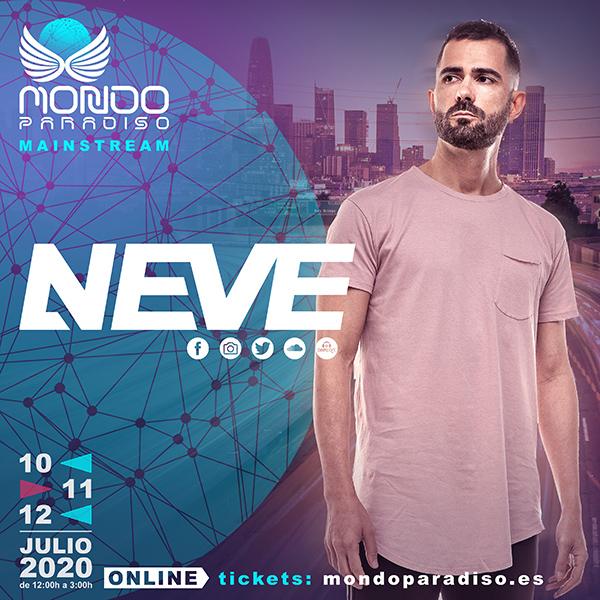 After confidently bursting onto the scene in 2006, Spanish producer Albert Neve firmly cemented his reputation as one of the leading light of the electronic music scene in his native country with a string of outstanding solo releases, remixes and collaborations with well-known artists worldwide.

Barcelona-born Albert started his brilliant trajectory at the age of 15 and soon established himself as a producer with a surprisingly natural talent and maturity well beyond his age. Proof of that is he managed to excel in his musical career while studying IT engineering, but it wasn’t long until he decided to follow his instinct and apply himself 100% into his real passion: music. His excellent early releases were only a hint of the levels of success he would experience just a few years later.

Since his early foray into the world of music, Albert has kept up a relentless schedule of touring, producing and remixing, proving beyond any doubt that hard work is as much a key to success as pure talent. Spending a fair share of his time hunkered down in the recording studio, Neve has built up an impressive catalogue of releases, with his musical output featuring on labels such as Spinnin’, Sony, Universal Motown, Cr2, Blanco y Negro, Chuckie’s Dirty Dutch imprint, Sander Van Doorn’s DOORN RECORDS imprint, Tiësto’s Musical Freedom label or Dimitri Vegas & Like Mike’s prestigious Smash the House label.

It was Albert’s work with Dutch powerhouse Chuckie that initially sent Albert Neve’s name into the stratosphere, as their 2012 remix’s of DJ Obek’s ‘Craissy 2k12’ stormed its way up the Beatport charts and caught the attention of French megastar David Guetta along the way. Guetta embraced Neve’s music, inviting him into his musical empire by remixing worldwide smash ‘Play Hard’, becoming a festival staple, rousing the crowds of Tomorrowland, EDC and Creamfields to name a few. If that wasn’t enough, and thanks to that remix, Neve was personally invited by Guetta to play two exclusive dates at his F*** ME I’M FAMOUS parties at Pacha Ibiza. Plus, his collaborations with Pacha resident JP Candela on 2015’s ‘Future Rave’ stormed to #34 on the Beatport electro house chart, while his collaboration with Chuckie, ‘Damn’ reached #5 in the chart.

His first reference inside Tiesto’s label, Musical Freedom, was the song ‘Let The Bass Be Louder’, in collaboration with his Spanish partner Abel Ramos and released in February 2016. The single, thanks to its worldwide success and support, ended up being chosen to be part of the «Sleepless» movie soundtrack, starred by Jamie Fox.

Subsequently, he released together with Abel Ramos ‘Party’ and ‘Flat Beat’ in 2017, reaching #1 in Beatport. One of his most successful recent releases has been ‘No Matter What’, a collaboration with Bougenvilla and David Puentez. The single reached global iTunes #1 in different countries along the globe, specially in Germany where it was awarded as one of the tracks of year in 2018, with more than 9 million streams on Spotify. Albert just released his first track on Don Diablo’s label Hexagon in collaboration with David Puentez. ‘Superstar’ hit #1 in Global iTunes Germany global charts in 2 days , #1 in Beatport’s Future House chart and #24 in the Main chart.

Also with Ramos, he hosts the Secret Room Radio Show, one of the most valued and followed in his homeland, weekly broadcasted through the most important dance radio station in Spain, Los 40 Dance.

The recent announcement, a self-owned record label, together with Abel Ramos, Insolent Records, under Blanco y Negro’s umbrella, is without a doubt a new and important professional adventure, being a fresh and ground-breaking proposal in today’s music scene with a first release that will see the light in spring.

The invaluable support from some of the biggest names in dance music, and a series of hit releases to justify the hype, Albert Neve’s career is swiftly on the rise. His DJing has taken him around the world, from Asia to South America, from Tomorrowland to Ultra, and his productions continue to entice and excite fans and fellow producers alike. After a 2019 full of success, the world is ready to see him smash it even harder for 2020.